How I Love My Coat of Many Colours : The Macallan Whisky 1824 Series

When you look at a bottle of scotch whisky, which key elements on the label draw your interest? Is it the word 'single malt'? Is it the age statement? Maybe it's the brand name? All of these touch points we, as whisky drinkers, have become familiar with over time and each is protected by a trade organisation called the Scotch Whisky Association (SWA) in legal guidelines.

These guidelines are there to protect you, the consumer, so what's written about on the label reflects accurately what's in the bottle.

There is one area which the SWA does not have any guidelines on and that is the use of E150a, caramel colouring (other than to allow its use).

The addition to whisky of a colouring agent is nothing new. Companies have been doing it for a long time and those who do claim it has no taste side effects to the liquid and that its use is purely to create consistency in the look of the liquid for the consumer.

However, aside from some local laws in certain countries, when E150a is used the whisky producer is not obliged to state on the label its inclusion, thus you have no way of knowing if it has been used or not. Well, that is unless the producer chooses to tell you and, in this age of traceability and authenticity, it's more likely that a whisky company will tell you when they HAVEN'T used it and some whisky producers actively state that they do not use any colouring agents in their products. 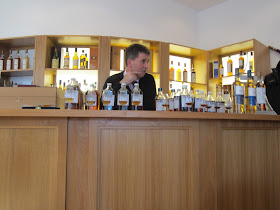 One such whisky house to leave their liquid 'au naturale' is The Macallan, who are releasing a new range of whiskies created by The Macallan Whisky Maker Bob Dalgarno (left) which focus on colour, as opposed to age under the banner of The 1824 Series.

The four new offerings are all 'No Age Statements' and named roughly after their own colours; Gold, Amber, Sienna and Ruby. These are to be released in slightly different markets (Gold in the UK and Canada, Amber in Europe and the other two pretty much everywhere) replacing the 10 - 17 year old Sherry and Fine Oak offerings. This means that if you want to buy a bottle of The Macallan with an age statement on the front, the youngest will now be 18 Years Old (currently sitting at around £100 a bottle).

The new expressions will increase in price as you go up through the range, with Gold starting at about £35 in the UK (Amber being similarly price in Europe), Sienna being around £75 and Ruby weighing in somewhere near the £125 price point. So, the darker the liquid, the more expensive the whisky. But why?

However, an age statement will give some idea as to what the liquid in the bottles tastes like, so if you remove the age statement (and the whys-and-wherefores of that argument is a post in itself) there still must be some way for you, the whisky consumer, to have an indication of the flavours you'll get from the whisky you're buying. In this case The Macallan believe that you'll be able to tell from the colour. The reason for the price hike between colours is that, according to The Macallan, the more active casks which give greater colour and greater intensity of flavour, are much more scarce. Therefore, when creating an expression that is much darker / intense, the liquid is harder to find.

No doubt this bold move of creating 'wysiwyg' no age statement whisky will spin off long debates across both the digital whisky community and the printed press on the matter. (Engage us on twitter about it if you like @WeHeartWhisky, or on our facebook wall www.facebook.com/caskstrength) But the real key is the liquid. Is it any good? 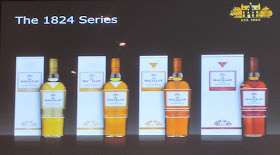 Palate: Orange blossom, juicy fruit chewing gum, lemon sherbet and some pineapple juice tones. There is also an appley note to the palate. Really very easy drinking and quite delicious.

Overall: This is a super 'entry level' whisky which is just so easy to drink. I don't know if it is psychosomatic but it reminds me of the old Johnnie Walker Gold label. I can see this whisky, at this price point, being a stable in my cabinet and is a really great example of a classic Speyside whisky.

Palate: The palate on this expression is far more oily than the gold, giving off apricots and maple syrup, plums and damsons.

Finish: Some juniper hints, lemon peel and cinnamon. The flavours in this are almost Negroni-like.

Overall: With its Negroni flavours, this whisky would make a great aperitif and should find real favour in places like France as a pre-dinner perk.

Nose: Strong and robust, the nose gives burnt sugar, some blackcurrants and a hint of marmite of hot toast as well as a freshly opened tin of floor polish.

Palate: Allspice, blackcurrants and a huge hit of cherry and dark chocolate. Big and oily, this palate is full of late summer fruits.

Nose: The aroma of freshly roasted coffee beans is followed by cardamom, fennel and dark chocolate mousse.
Palate: Even more oily and mouth-filling than the previous whiskies, this has red grapes, fresh figs and some hints of strawberry jam.
Finish: The red cherry won't give up on this expression either, but this is much more reduced (in a cooking sense) and gives a more intense, richer flavour than the Sienna.
Overall: Same as above, this is an excellent, full bodied whisky packed with flavour.

Well, tasting the range in full, one can certainly see a clear linage in the intensity of flavour from the Gold though to the Ruby. Our pick was the Gold which we thought was just a down-right excellent dram, whatever the (no) age or the colour. The Macallan seem confident that this new way of talking about whisky, through the medium of colour, is the right direction for their whiskies and that the consumer will understand the concept of colour relating to flavour and scarcity. 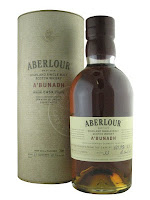 However, re-educating the consumer away from age to colour isn't going to be easy. We all know that older whisky is rarer whisky ("angels' share" and all that) but will anyone grasp the concept that darker whisky is rarer and thus more expensive. Take the Aberlour a'Bunadh: a no age statement, non-chill filtered, non coloured Speyside single malt whisky that is traditionally a very dark liquid. This currently retails at £35. But, if we're equating colour to cost and quality, this should be a £125 whisky (if not more). If colour rules and the a'Bunadh is side by side on the shelf with The Macallan Gold, which does the newly educated consumer choose? Same price point, same region, both NAS... the perceived value of the brand notwithstanding, it's a draw on all categories except one: colour. And if you're asking the consumer to choose on colour, then in that fight there is only going to be one winner.

At the end of the day, it's the liquid that matters and our feeling is that the price points for these new Macallan whiskies are actually pretty fair; I just hope the back story being told to justify those prices isn't overly complex. Sometimes a nice plain three piece suit is far more classy than a coat of many colours...
at 12:28
Share
‹
›
Home
View web version